Through the Looking-Glass – My Wild Adventure at BugShot

This past weekend, I had the opportunity to to go to Bugshot on Sapelo Island, GA to take pictures of bugs (and as it turns out, lots of herps) with three of the world’s best photographers; Alex Wild, John Abbott, and Piotr Naskrecki.

(PS you can click on all the pics to enlarge them) 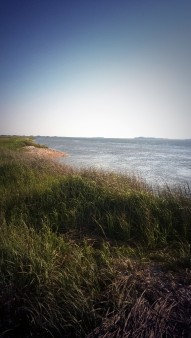 The marshes of Sapelo

Sapelo Island is a coastal barrier island and one of the things that makes it so unique is its multiple eco-zones moving inland from the beach. The eco-zones  include the beach, primary dunes, secondary dunes, marsh, pine forests, and oak forests. Sapelo also has a rich history which we were fortunate enough to learn about. (Thanks Wade!)

While I was definitely the least experienced photographer on the excursion, I  learned so much, not just from the instructors but from the other students. I think that was one of the best features of BugShot, everyone could learn something from someone. Not only did a I learn a lot about photography, but each of the instructors gave a great natural history talk about their group of interest which was one of my favorite parts about BugShot.

But pictures are worth 1000 words, right? So come follow me on my journey with some unconventional photography work.

I had a lot of people ask me about my set up since I was the only person who was using this aside from one student who busted out his reverse mount for extremely tiny things. Like larval ticks tiny things.

Camera:  Like Thomas Shahan, I use a reverse mounted lens for my photos.

I didn’t have the diffuser until the last day of BugShot where I made it.

I can do this with with a reverse mount ring from Amazon for about $10 (make sure you get one that fits your camera model/body) and some step up/down rings. I get used old 35mm film lenses with the manual aperture rings which I buy used from B&H. This means that I can get macro shots with lenses that cost between $20-$50 dollars.

I did build a diffuser halfway through the workshop, which I talk about below.

Here, I’ve manually adjusted the focus to get a picture of the ear cuff.

I also use my Nokia 928 (8,7 megapixels) cell phone, but someday I’ll upgrade to the Nokia Icon (20 megapixels). In addition, I use the free Nokia Camera app which allows me to manually adjust the focus, ISO, aperture, shutter speed, and white balance. You know when you go to take a picture of a small thing on your cell phone, and during the autofocus shenanigans, it clearly focuses on your subject before becoming blurry again? This app lets me focus on what I want which is great for small things! (There are Android and Iphone equivalents)

This is the extent of my equipment that I was working with. Not particularly sophisticated, but it gets the job done. 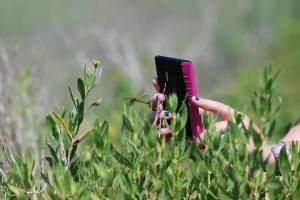 I didn’t get into all the fancy equipment (like focus stacking or high speed photography) but I did learn a lot of basics that I was lacking.

Areas I specifically think I improved was capturing the spirit of the animal, diffusing the light, and the white box setup.

Capturing the Spirit of the Animal

Capturing the background lets us in on the toad’s world. (toad is unamused)

I think the easiest, and most important thing to do, regardless of your equipment is to capture the spirit of the organism. Look at it from its point of view.

Piotr gave a great talk about composition and how your photographs can mean so much more if you look at the organism in a way it has never been seen before, catch it doing a cool behavior, or capture it in its environment. He encouraged us to dig a hole, and to get right eye level with the creatures were were photographing.

Basically, if you’re into macro photography – be prepared to spend a lot of time on your stomach.

For example, Piotr was giving us an example of taking a picture of a toad with his fisheye lens that incorporated the background. Therefore, we – the viewer -are seeing what the toad sees and we learn more about the toad and its context.

I didn’t have a fancy lens that I could use, so I tried the same technique with my cellphone.

I dug a hole as Piotr suggested to get down low. I instructed Ian on how to use my cellphone to get the pic. I’m taking a pic of a hermit crab, which you can see below.

The beautiful trees on Sapelo covered in Spanish moss. I also took this picture with my cellphone

I didn’t have a diffuser yet, but you can see how looming and huge the hermit crab looks from beneath it. And look at all the algae on him!

The second most important thing I learned was to diffuse the light. Before I was just just walking around with my popup flash and was frustrated with the caliber of my photography. Basically, I’d get a “good” picture but I’d get a lot of hot spots and it was hard to see the little details in the animal.

Because I’m me, and “difficult” or “too hard” isn’t in my vocabulary, on the 3rd day of BugShot I went to photograph some ants (Dorymyrmex bureni). After disappointing results, I talked to Alex who told me to think of what my subject can see. The ant could only see the two white flashes and I needed more of a diffused cloudy day effect.

This was the setup which gave me a not so great picture of the ant.
Despite the obvious hot spots, the picture is really dark in some places and the sand looks really washed out in the front.

Of course Alex prefaced all of this with “photographing ants is for grade A photographers.”

While this would probably hurt other people’s feelings, I just got excited and was like , “I’ll show you” in classic “Nancy style”. So, Nash – one of the other students, helped me build a diffuser which I took out the next morning to photograph the same ants in the same anthill. And this one came out a lot better.

The diffuser in question

The diffuser in question was haphazardly thrown together, but works really well! I used two sheets of Rosco Roscolux Tough White Diffusion (paper/plastic?) with two sheets of tracing paper shoved in between. I used poster board for a “frame” although I am going to use wire so I can bend it a bit more easily and sandwiched everything together. It’s taped together with “official BugShot tape.” I cut a hole out in the middle so it can pop onto my lens. I did notice that out and about the pictures would come out kind of dark, so I later removed one of the tracing paper pieces.

The two things that I noticed the diffuser did was a) remove those glaring hotpots and b) brought out a lot more of the subtle colors on the animals.

Spider eyes are very unforgiving. They’re so perfectly round that they’re like little marbles so they shink just about any bit of light into a tiny point. Without the diffuser I’d often get  stars in the spiders eyes (left) which made them look like goofy cartoon characters.

I’m working on a “field” book for students to help them understand how to identify insects to family. So the main reason I got into photography was to get some of these pictures of the insects but I had little regard for the subtleties of photography. It was more like a stamp collection than a challenge to bring the animals to life.

Here are three different pics of a tiger beetle. The first is on the black light sheet and the other two are in the white box.

The most important aspect of the white box is to achieve an even distribution of the lighting within the box.

To achieve this, Alex showed me that I have to put the two flashes in the middle of the box facing upwards. Many of Alex’s white boxes don’t have backs so you can a) incorporate the background if you’d like or b) make the insect look like it’s on a black background. John printed out a bunch of backdrops which could be used in the back of the box as well.

This is the same mole cricket, in the same box, just with different flash setups. The off camera flashes do am much better job at evenly diffusing the light than that popup flash.

You can also use the white box to not make a white background, although I didn’t think to do this at the time. But you can put leaves, bark, twigs, flowers, whatever in the white box. The white box’s main purpose is to make nice even lighting, you can put whatever you want in it to make it look natural. Ptior used this technique to take pictures of the Zoraptera he was so excited to see  =)

This was a crazy adventure that was over in a blink of an eye.  Sapelo was gorgeous and I learned a lot of new techniques that will help me when I’m puttering around the bot gardens here and when I go back to the rainforests of Ecuador in a few weeks. This was such an amazing workshop. Everyone was really nice, supportive, and helpful. I was apprehensive about going at first because of my skill level and I thought people would be judgey, but they totally weren’t and I learned so much from everyone. Alex runs a BugShot trip to Belize every year – so if you like bugs, like cool people, and wanna chill in the rainforest, I suggest going!

Thanks to everyone who made my adventure so special ^.^

Seaside Dragonlet (Erythrodiplax berenice).  This is a unique insect that can handle the salty water of the marshes. Pic taken with my cell phone.